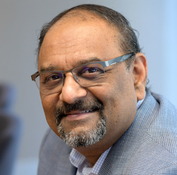 Suresh was appointed as Chief Operating Officer at TSB in August 2019. He has over 30 years’ experience in technology and financial services. He has held Chief Information Officer and operational roles in international, retail and corporate banking and led complex global scale technology operations and integrations.

Suresh began his career at Citi Group working across a range of senior technology roles. During his time at Citi he led the creation of their branch-banking platform and led acquisition / integrations into multiple countries across Central and Eastern Europe, Middle East and Africa.

He joined Barclays in 2008 as CIO for Barclays Corporate Bank and then went on to lead Operations and Technology for Barclays UK, where he helped set up the Barclays’ ring-fenced bank, leading 13,500 employees.