The nearly three year long investigation by the Competition and Markets Authority (CMA) into competition in retail banking seems to have backfired.  In the past 12 months since the publication of its final report, the number of consumers switching bank accounts has fallen by 14% – with the average person likely to be £70 better off by switching, that’s a collective £10 million in savings consumers are missing out on.

The CMA’s attempt to fix the industry and get consumers a better deal has failed and banking is still not working in the interest of consumers.  The big banks continue to have a stranglehold on the market – they are taking customers for granted, trapping them on poor deals and making it impossible to switch. 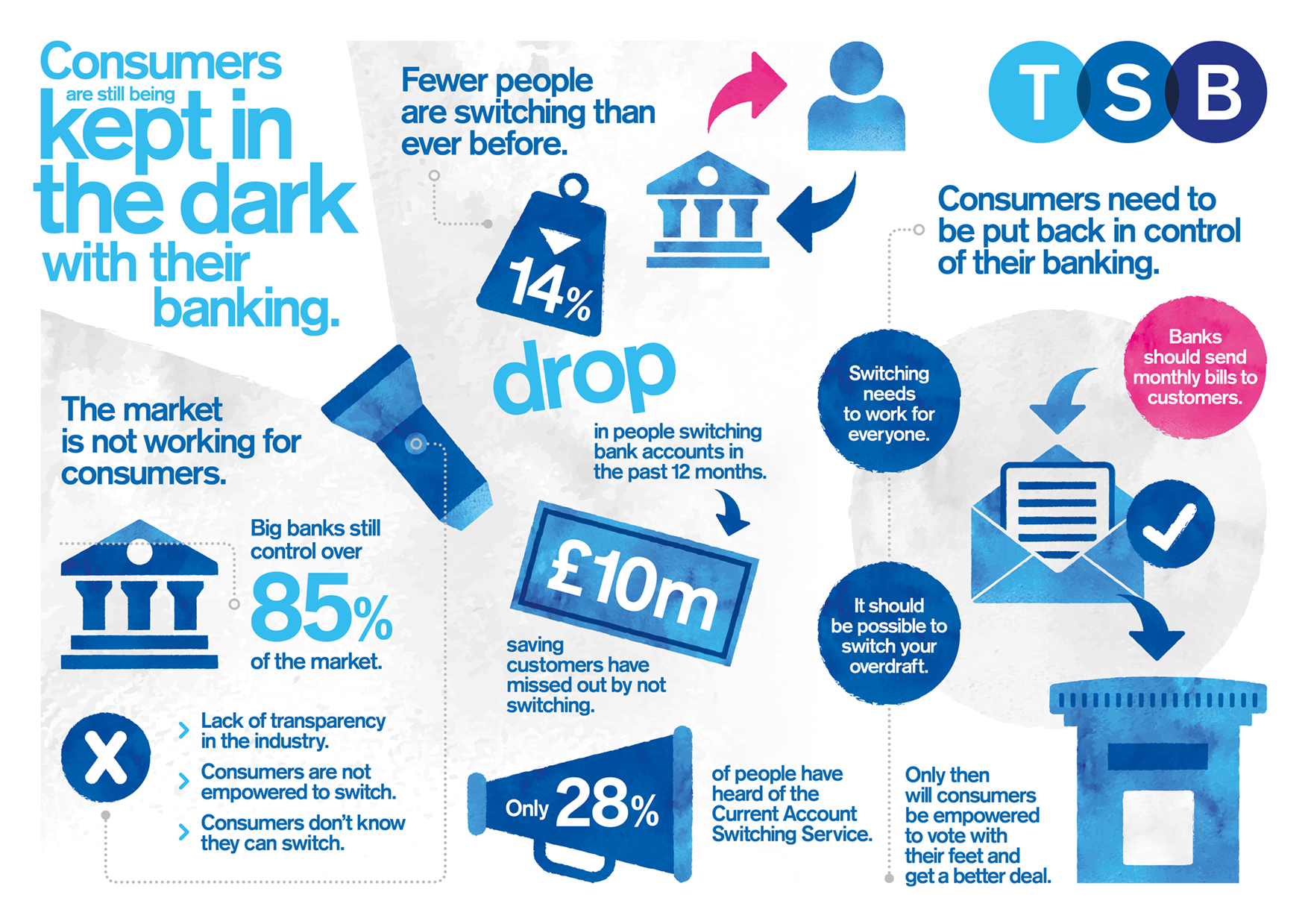 Fewer people are switching than ever before

So, it’s no wonder that nearly seven in 10 people (68%) think competition in the retail banking industry is worse or just the same compared with this time 12 months ago2.

Consumers have been kept in the dark for far too long

“The CMA had a golden opportunity to fix the industry, by enabling consumers to make informed choices about their banking and ultimately putting them in control.  But one year on and its attempt to get consumers a better deal has failed.  People are still missing out on the benefits of switching – to the tune of another £10 million in the past 12 months” says Paul Pester, CEO at TSB – the bank born to bring more competition to the UK.

Throughout the CMA’s investigation, TSB explained that there are a range of interconnected issues preventing the banking market from operating in the best interests of consumers.  When taken together, these issues have created a market that has been stacked against consumers for far too long:

1. Consumers don’t know what they are actually paying for their day-to-day banking.

2. Consumers can’t easily assess whether a competitor product would be better for them.

3. Consumers can’t easily move their bank account – even if they do decide to switch.

Whilst some people might refer to banking customers as ‘inert’, it’s clear that many consumers are simply ‘trapped’ with their bank due to a lack of knowledge, a lack of informed choice, and a lack of ability to vote with their feet.

Disappointingly, these issues still exist today – with new research by TSB2 revealing that:

Putting customers back in control of their banking

Last year, TSB urged the CMA to take action – recommending three simple changes to make the market start working for consumers, and not just for the banks that serve them:

1. Customers need to know what they’re paying for their banking.  All banks should tell their customers how much they’ve paid each month through a standard format “monthly bill” – banking must be the only industry that doesn’t do this already.  This will not only lead to a greater understanding of banking products for consumers, it will also act as a prompt to shop around for a better deal.

2. The industry needs to create a solution so all customers can switch their bank account, particularly overdraft users who stand to gain the most from switching – saving £260 a year on average as a heavy user according to the CMA’s research – but are least likely to switch.  This should include a requirement for the industry to provide a standard format “credit passport” which customers can take to their potential new bank.

3. All customers need to be made aware of their right to switch banks.  All banks should be required to promote the existence of the Current Account Switching Service to customers – explaining how switching is easy.

In the CMA’s final report it committed to delivering the spirit of TSB’s credit passport through an Application Programme Interface (API); but this has fallen into the hands of the big banks that are dragging their feet.  The pace of change is too slow and customers have missed out on another £10 million in the meantime because they still can’t switch.  The industry will need to do much more to explain the benefits of open APIs to consumers – only 2% of people have heard of the concept according to research by TSB.

Elsewhere, the CMA failed to make any strong recommendations to bring real transparency to banking.

Paul Pester, Chief Executive Officer for TSB, says:  “In a truly competitive market, consumers will be offered genuine choice and a level of transparency they’ve never seen before, so they can make informed choices and switch with ease.  Only then will consumers be empowered to vote with their feet and get a better deal.

“As Britain’s challenger bank, TSB will continue to campaign for a standard format monthly bill for all bank account customers, a switching service that works for everyone – including overdrafts users and, for the big banks to make their customers aware of their ability to switch.”