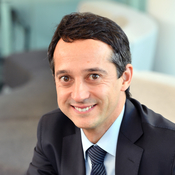 Carlos was appointed Chief Risk Officer in January 2020. He joined TSB from Sabadell in March 2016 as Chief Audit Officer. He joined Sabadell in 2013 where as Chief Risk Control Officer he led the design, development and oversight of the Group’s risk appetite framework.

Before Carlos joined Sabadell, he was the Chief Financial Officer of Catalunya Bank for three years, where, during the global financial crisis, he was appointed to work closely with the Spanish regulator and the European Commission to develop and implement the resolution plan for the bank.