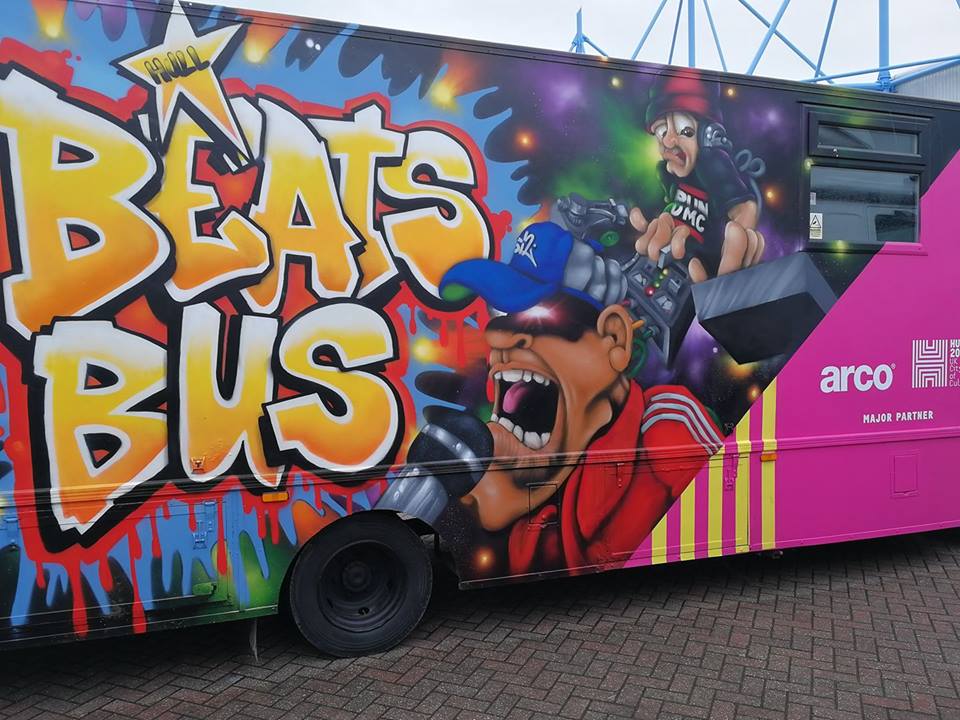 A bus which was converted into a music studio is now helping hundreds of young people discover their potential and develop their self-esteem and confidence in Hull.

When Steve Arnott realised that many young people who wanted to learn how to make music couldn’t make it to his recording studio, he decided to take the studio to them.

He kitted out the bus with everything they need to write, record and perform their own hip hop songs and started parking it in the neighbourhoods of Hull where they live.

The Hull Beats Bus now regularly rolls up on estates, in schools and at community centres, taking a team of top artists who give workshops in songwriting, DJ-ing, breakdancing and graffiti art.

The mobile studio allows creative young people who might not have the opportunity to develop their skills the chance to shine by showcasing their talents. It is in turn helping the local community thrive.

Steve, 43, who made his beat bus dream a reality while working in a factory, said: “I started off doing music workshops in a youth centre in the centre of Hull, with young people aged 16-25.

“It was successful but not many came. Those who did grew not only in their music-making but also in confidence and social skills.

“I began to wonder how we could reach more young people, and particularly younger children who were at an important stage in their development and who would benefit in the same way.”

Steve was lent the bus from his employer and transformed it into a hip hop studio which has given disadvantaged children the chance to make music, open up about their lives and channel their energy and talent.

Since starting out last year the bus has worked with more than 600 young people - and uncovered some special artists.

He said: “The bus was my chance to demonstrate the power of music. As well as the workshops, we’ve discovered some amazing kids with potential to make it big. We are mentoring a core group of 10 young artists who have recorded tracks, played at festivals and are starting to become known.”

He said the sessions have also helped young people open up about their lives.

He said: “They tend to speak about stuff in lyrics which they wouldn’t mention in normal conversation, and that’s been a relief for them.

“We combine the music workshops with counselling. It is helping many overcome their problems, express themselves and believe they can achieve, whatever their circumstances.”

He said: “My dream now is to have five different beats buses in five different cities, and use music to empower many more vulnerable children and young people.”