Big nights out for gig buddies 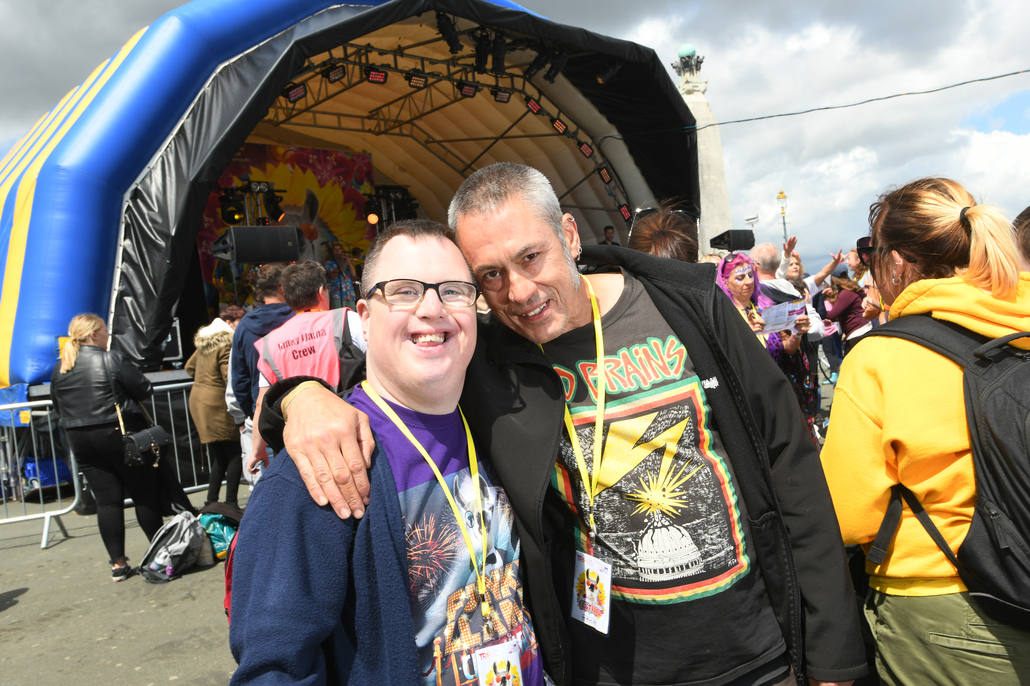 Andrew Steer does not let his disability define him. The 36-year-old has Down syndrome, but just like many young men his age, he still wants to go out and have fun. That he is able to live the life he wants to, is thanks in part to his friend Steve Knight and an innovative project that brought them together four years ago.

The theatre’s Engagement Manager Sara Baldwin explains: “The programme is part of the Stay Up Late campaign which was founded in Brighton and where they run the Gig Buddies scheme. We do this for our events as we noticed how many people were leaving our events early, even though they didn’t want to because they were reliant on the shift patterns of support workers and/or attended with an elderly parent. We wanted to ensure that people that came to a Funky Llama event could stay up late and have the opportunity to do so with the support of a ‘buddy’.

And Steve says: “I have always wanted to give back, and when I heard about the scheme, it seemed like a perfect way to do so. I also love going to gigs and Andrew has taught me so much. He lives in the moment and not only does he have fun when we go out, but he has taught me to loosen my own inhibitions. I can be socially awkward but when I am with him, he brings me out of my shell.”

He added: “Andrew’s favourite musical is Grease, so if any of their music comes on, I have no choice but to get up and dance with him.”

The Funky Llama programme, which launched in 2013, is a platform for disabled adults to actively participate in the creation and delivery of a programme of activities throughout the year. For just £6 annual members can attend regular social meet-ups and get involved in a variety of weekly creative workshops at the theatre. Around 200 disabled people are currently benefiting from regular engagement with the programme.

The ‘Buddy’ scheme came about when Sara realised that although many disabled people were coming to events, they often missed the headline act.

She explained: “Andrew actually came up to me during an event, he was distraught because he was having to leave early. He didn’t want to go, but he was there with a carer, and they had to get them both home. It hit me that we had to think outside the box.

“Andrew’s mum is brilliant at taking him to our events, but who wants to be at a gig with your mum, especially when you are a grown man? Also it didn’t seem fair to keep asking her to stay out later at an event she attended purely so her son could experience it. For me it was also about believing that everyone has the right to a healthy social life and wanting to ensure that we were removing barriers people may face that prevent them from getting involved.”

After learning about a similar scheme launched by Brighton-based charity Stay Up Late, Sara formed a plan. “Most people take it for granted that they can go out and do something simple like pop to the pub. But for the disabled community this is often not so simple. You may need to pay a carer or support worker to take you and pay for their ticket as well as well as your own, you need to think about transport there and back, and whether the venue is physically accessible for example. It isn’t always easy. Plus for carers, they might not want to stay late at an event or their shift pattern means that they can not stay until the end. This can therefore mean the needs of the individual are overlooked.”

At the moment, seven disabled people have been ‘buddied’ up. Each pairing is very carefully considered with training involved, and lots of engagement between the families to make sure the partnership is right for both parties.

Steve and Andrew were one of the first to be paired up. Steve is a welder who works with the theatre, so was familiar with the Funky Llama programme. “I just think what they do is fabulous, and I wanted to be part of it.”

Sara added: “What is nice about Steve and Andrew is that they have built a relationship with the wider families beyond just going out. It works for them both, and they both get a lot out of it. What we are ultimately about is building relations with the community. We don’t impose, we speak with people, find out what they need, and then look to deliver something that addresses that. So far it is working out really well.”