It's hard work, but it's worth it. 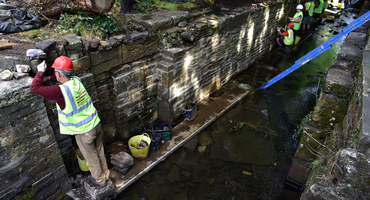 Meet the pensioners who have spent 20 years restoring Swansea Canal to its former glory.

With beautifully restored walkways and cycle-paths, a canoe and kayak hire service, paddleboarding and miles of navigable water, Swansea Canal is a thriving natural resource for the people of South Wales.

But it has not always been the case. Up until the 1950s, the canal was a vital transport route for the Welsh coal industry, carrying 250 tonnes of coal a day on barges more than 16 miles between Swansea and Abercraf.

But as the coal barges dwindled in number, the 240-year-old canal fell into disrepair, and two-thirds of it was buried beneath the city’s post-war buildings and the new A474.

In 1981, the Swansea Canal Society was formed, and over the past 37 years its volunteers have brought about a remarkable transformation.

Their first task was to save the last five miles between Clydach and Ynysmeudwy, repairing eroded banks, repointing lock chambers and building new steps and walls.

Since then they have managed to open up the entire route down to Swansea, and soon hope to link with other canals to create a 34-mile stretch of navigable waterway.

And today they are continuing their work, bringing new sections of the canal back to life for people and wildlife alike to enjoy.

The hardy group of mostly pensioners meet every Tuesday morning and spend the day digging, shovelling and lifting as they carry out repairs, excavating buried locks and building towpaths, among many other tasks.

Gordon Walker, the society’s chairman, said: “We meet in the cafe to fill ourselves up with breakfast and then we start work on the canal at 9am.

“It can be very hard work, especially when a lot of our volunteers are getting on a bit in age, but they enjoy it and it helps keep them fit.”

And thanks to the hard work of the volunteers, the canal is now a thriving resource for the community.

Gordon added: “It’s about bringing the canal back into use and provide something which will serve the community for years to come. It’s a joy to see the canal brought back to life and people using it, canoeists, cyclists and walkers.”

Members of the Swansea Canal Society also run a canoe and kayak hire service so people can get out on the water.

And earlier this year they helped launch a scheme allowing local people to learn how to paddleboard on the waterway.

Their long-term aim is to extend the route through the valley to the docks in Swansea and create a beautiful water park.

Jade-Marie Hester, from the Canal and River Trust which owns a stretch of the canal which the society has helped reopen, praised the volunteers.

She said: “They’re just really really enthusiastic people that come together, who’ve all got the same goal, and want to see the canal reopened.

“We couldn’t do the work that we do at the moment without them.”