The club that’s about more than competition 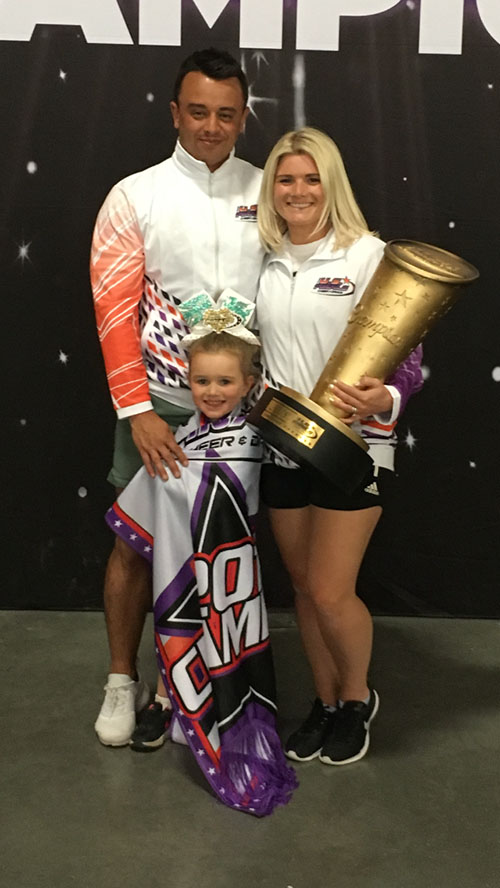 Kids can do gymnastics, cheerleading and homework at this community-minded gymnastic club.

Gymfinity is a gymnastic club with a difference. Not only is it successful, but it offers youngsters classes in gymnastics, cheerleading and dance, but does so much more too for the community.

Here kids can get a bite to eat and finish their homework before they get going. It’s all part of the caring ethos that founder Zoe Reed wanted to create. She wanted to give back after a difficult start to life.

Zoe, 32, had been doing gymnastics since she was 11. With not much money in her family, her grandparents took her to a local gymnastics club, as a way of giving her something to focus on and a reason to smile.

“Soon I was going once a week, then twice, then five times a week,” she said. “It was a complete escapism for me, but a passion too.”

So it was something she and Paul, who have a daughter, Olivia, six, wanted to bring into other people’s lives.

“This is quite a challenged area, with lots of obesity and lack of motivation,” said Zoe. “But there’s a lot of heart too, and we wanted to bring something positive to the area, make gymnastics accessible to everyone. It’s often something people class as a luxury, but we keep costs down where we can, with an hour class costing just about £4.”

And now, just two years on, the club, which was set up on the site of a former factory, is thriving. “Many of the girls, as it’s mainly girls that come, come to us straight from school,” explained Zoe, who is expecting her second daughter in February. “We have an area upstairs with desks, and they’ll have something to eat and do their homework. Very often, their homes aren’t equipped with quiet areas or parents who can help them with it.

"But Paul will be on hand to assist them, and they can concentrate and eat, before heading onto the gym floor.” The couple also arrange for different workshops, focussing on healthy living.

Not only that, but members of the club are also given the chance to see parts of the world many could only have dreamed of before.

Recently 29 young gymnasts from Tredegar in Blaenau Gwent travelled to Las Vegas in May for an international cheerleading and dance competition, it was the first time most of them had travelled so far from home. It was also their first international tournament.

Despite their youth and inexperience, the team from Gymfinity won the competition - a remarkable achievement for a club set up just two years ago.

“It was incredibly exciting and we were so proud,” said Zoe. “To top it off they won the competition! It was an experience the athletes, parents and club will never forget.”

In total, more than 100 members of the club, coaches, volunteers and relatives travelled to Las Vegas for the US Cheer and Dance Finals. That support is a sign of how everyone involved with the 400-strong club feels as close as family.

“Teal is the colour of our leotards and t-shirts,” added Zoe, says. “So everyone says we’re the Teal Family.” And this was exactly the type of thing Zoe and her husband, Paul, 32, wanted, when they set up the club at the end of 2016.

The members are aged from three up to around 27, and Zoe says some of them even volunteer to help the younger ones now.

“It’s a volunteer scheme, but gives them an insight into the working world and something to have on their CV… we’re really helping with their futures too,” she says. “One girl, Elise, is 17 and she’s just started working part-time with us, so we’re very proud of her.”

Gymfinity is supported through the Social Business Wales project, delivered by the Wales Co-operative Centre.