Wheelchair dance club is about “ability not disability”.

Ngozi Ugochukwu loves to be active, but as a wheelchair user, it was not always easy. She struggled to find a suitable dance class in her hometown of Manchester, and to fit exercise around her full time job.

She says: “I knew I wanted to be active and it made me determined to find a sport that I could do with both fellow wheelchair users and others who were able bodied. But it can be difficult especially if you are working full time to find anything that fits in with your lifestyle.”

Ngozi, 35, contracted Polio as a child and has been in a wheelchair ever since. The television researcher went to a special school where she was encouraged to be active, and it was only when she reached adulthood that she faced a lack of choices and the support structure to help make it work.

That is when she discovered Strictly Wheels, a club led by Paula Moulton and Gary Lynes, the UK’s first and only top class Latin Wheelchair Dance Sport couple who compete in Para Dance for Team GB.

They started the club to inspire others to take up wheelchair dancing - Ballroom, Latin and Freestyle - as a social activity and at competitive levels. Despite their success, essentially it’s about “ability not disability” and they offer demonstrations, showcase performances and workshops across the country. They also run free weekly Wheelchair Dance Classes in Manchester open to both wheelchair users and standing dancers to dance with wheelchair users over 12 years old. It’s also all about inclusion. Paula, 48, who uses a wheelchair due to a genetic condition, says: “We only started the club around three years ago but I have been dancing for ten. Dancing has kept me going and slowed down the progression of my illness. I just wanted to share that with others and give them the chance to get out and do what I do. It’s not just about learning to dance, it is about gaining confidence and building self-esteem.

“It is also about learning resilience. Sometimes you have to learn it’s ok to mess up. You need to accept criticism but also take praise. Some of the people who join us don’t think they are worth anything, but we soon show them what they are capable of. I love giving back to the community.”

Ngozi had no intention of joining a dance club when she was introduced to the group, encouraged by a friend from work, her now dance partner Lloyd Harris, who is able-bodied.

“At first I didn’t want to even try dancing. I just didn’t think dancing was my thing. Even when I first went I hated every minute. I felt like I was back at school again, the dancing felt so prescribed.

“But Lloyd was immediately addicted and then we got set a challenge to dance at the Wythenshawe Games, Greater Manchester’s biggest community sport and physical activity festival. I was apprehensive at first, especially being in front of a live audience, but the buzz was fantastic. From that moment I was hooked. That was three years ago.”

She adds: “Around the time I first started dancing, I’d lost my foster mother and my birth father within a couple of years, so had really gone through a tough time and felt really down.

I can’t tell you how much it has all helped with my mental health. Whatever is going on in my personal life it disappears when I am dancing. I didn’t have that many disabled friends, but through Strictly Wheels I’ve met people who understand what I am going through.”

Not only have the pair danced in Manchester, but they have progressed to perform nationally and even internationally.

“I’ve travelled to places I never thought I’d visit like Denmark and Germany. This year we are going to Poland.”

When there is an event coming up, she even practises every hour with Lloyd on the mezzanine floor at work.

“I am a tomboy so that whole dressing up thing is still hard for me. Luckily Lloyd has some fixed ideas and knows exactly how to dress me! Trying to get him away from sparkles is actually quite hard!”

She adds: “If you asked me three years ago, if I thought I would be doing this, I would have said, ‘hell no!’. But joining this group has been an eye-opener. It has been amazing. I didn’t think dancing was cool, but I was wrong, it really is!”

For more information about classes and how to get in touch go to strictlywheels.co.uk. 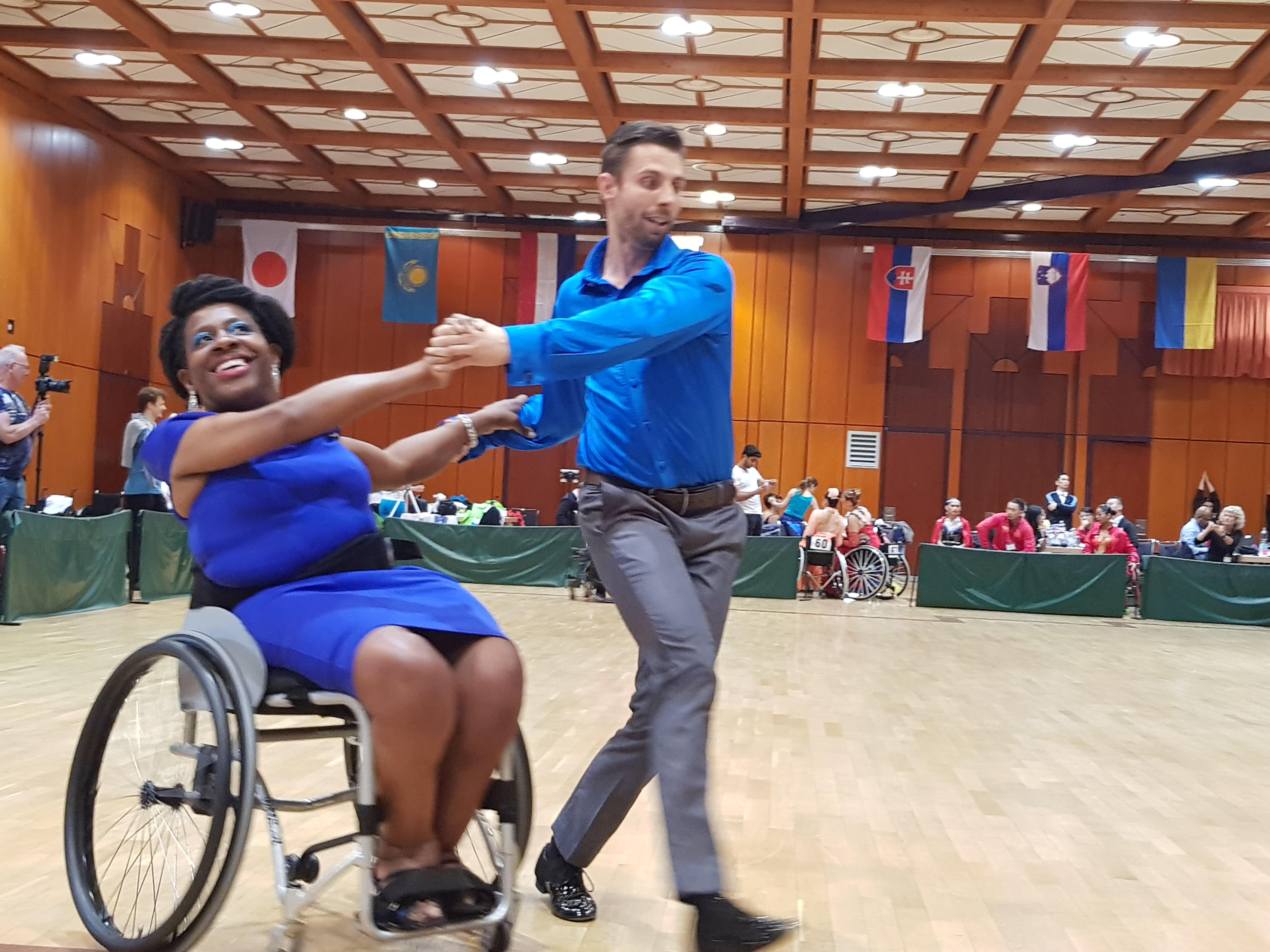