I Got All My Sisters With Me! 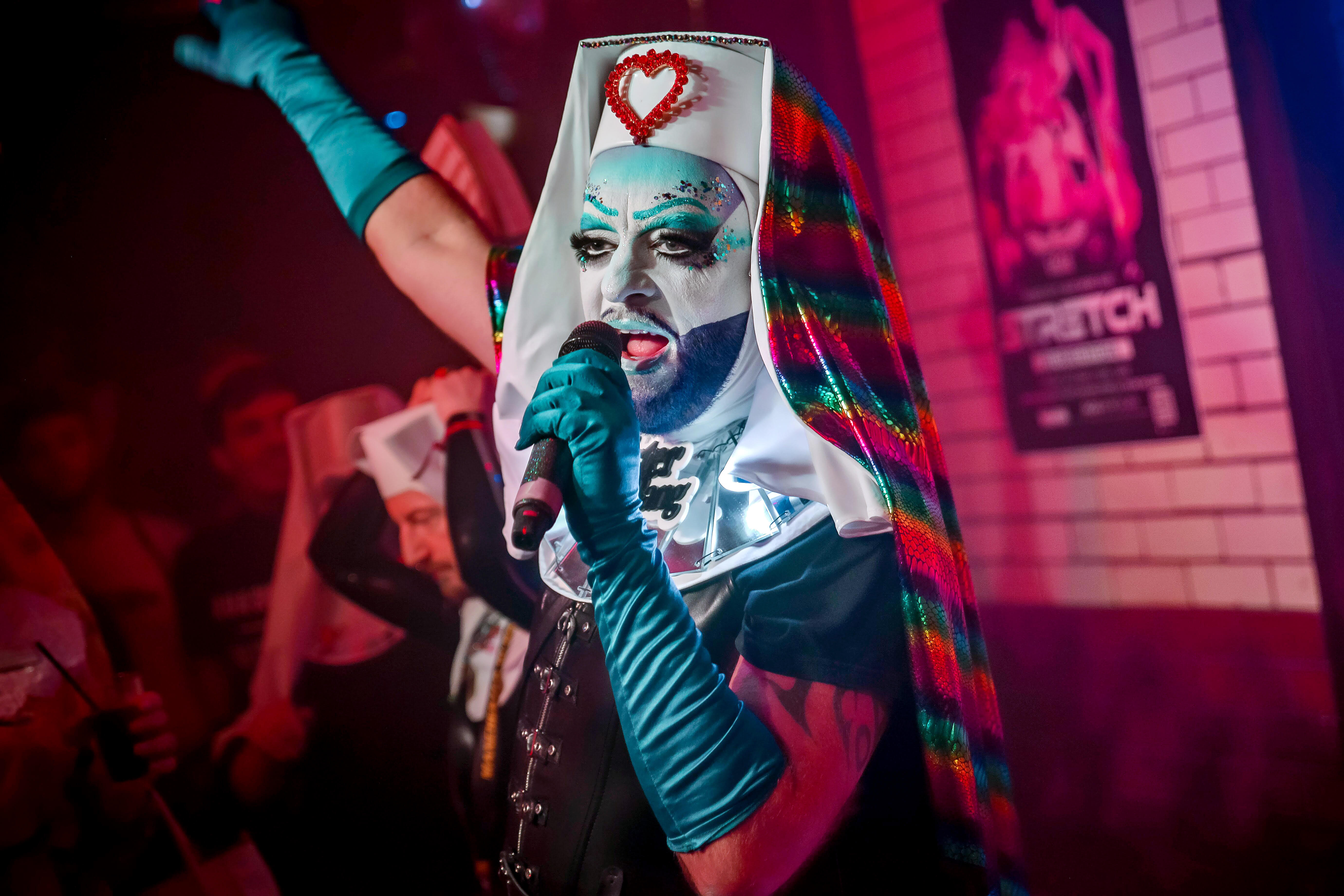 Sisters who aim to spread joy, acceptance and equality of the LGBT+ community and raise funds for local charities.

The Manchester House of the Sisters of Perpetual Indulgence create quite a stir when they hit the streets. None more so than Sister BangBang Ladesh, who towers at 6ft 3ins and that is before she even gets her heels on. But as a group they all stand out in their outrageous nun habits, coiffed veils, jewels and eyelashes affixed with carpet glue.

But all this effort comes for a reason. The group are actually here to help make a positive difference to their community. They aim to spread joy, acceptance and equality of the LGBT+ people through humour and positive action as well as raise vital funds for local charities.

They position themselves around various hotspots in the city including Manchester’s Gay Village where they hand out free condoms, a shoulder to cry on and even a hug to anyone who needs one. And they always carry a bucket to collect money.

Through interacting with the community they hope to promote sexual and gender positivity. “Yes, you can’t miss us,” laughs their self-styled mother hen, Sister BangBang. “Our habits were raided from a dressing room following a performance of The Sound of Music.

“It is our unique selling point. We decided that jeans and t-shirts just wasn’t going to hack it. People would just carry on walking past.

“We give out lots of hugs, listen to problems, bring a little fun into life and generally do good in the community. And all with lots of glitter, a wee bit of makeup and lots of positive attitude all wrapped up in a habit. Well, you don’t dress like us to blend in!”

At the end of the day they are all volunteers to the cause with ordinary jobs by day. Among their ranks they boast a teacher, a university lecturer, an NHS key worker and a computer programmer.

But this is all put aside when there is a ‘call to action’. Getting transformed for their night out is an affair in itself. Applying make-up alone takes on two hours, there is hair and nails, and of course their habits have to look perfect.

Mostly they congregate at Sister BangBang’s house, so they can get ready together and then they can all hit town at the same time.

The Sisters of Perpetual Indulgence started in San Francisco, but has snowballed into a world-wide movement. The Manchester branch has been running since 1997 and has around 25 Sister members who meet monthly. They are a mix of transgender, gay and straight people.

Sister BangBang, 46, joined seven years ago, and as she says in her own words set out to “shake things up” and up the tempo of their efforts. She organises workshops, activities, fundraising missions and plans events like feeding the homeless.

“It is not important what sexuality any of us are. This is not an institution for gay men. Anyone can become a Sister. But we all call each other ‘she’.”

“What is important is that we have a serious message. We promulgate joy and show that people should be accepted for what they are. We are not here to dictate what you think is right or wrong but to ask that you accept difference. I do subscribe to the belief that by coming together it benefits health, confidence and well-being.”

Unsurprisingly, they get invited to appear at many events. But Sister BangBang is very clear they are not a novelty act.

“We might be giddy and giggly but we are not a gimmick, we are doing a job of work. And we have a code of ethics. No drinking when we are out on duty.”

Thanks to their combined efforts, thousands of pounds have been raised for charities including the Albert Kennedy Trust which looks after young people with HIV as well as The LGBT Foundation, Alzheimer’s, MIND, the Christie and Centrepoint.

Their community spirit shines through but Sister BangBang’s enthusiasm is infectious. “When I first started I was told not to burn myself out. But you do get giddy with excitement, I sometimes like to think Manchester now, one day the world! Yes I am a busy man, but if I wasn’t I would be lost.”