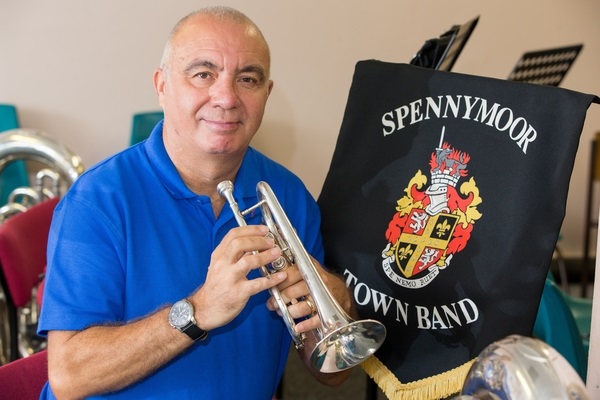 Brass band is thriving thanks to dedicated Hugh

The people of Spennymoor, County Durham, could not be prouder of their brass band. With 27 members, Spennymoor Town Band brings people of all ages together to learn and play music.

In September, they reached the finals of the National Brass Band Championship, and much of their success is thanks to the tireless efforts of their cornet player. Hugh Stephenson, 56, has helped keep the band in smart uniforms and instruments for decades.

The town's band has members ranging from nine to 80 and every one of them recognises Hugh's immense contribution.

Fellow cornet player Mike Johnson, 70, said: "The brass band movement is in Hugh's blood and he has worked tirelessly for it nationally and particularly in Spennymoor, where he's twice kitted the band out with instruments through his work.

"The amount of effort and time that he puts in can't be commended highly enough, he's a remarkable person."

There is a rich tradition of brass bands in the North East, with many found at the heart of former mining communities. Nearly every mine or colliery in the UK had a brass band. They kept morale up among workers and provided world class entertainment.

As well as bringing people of all ages together, they also provide children with music tuition that is not always offered in schools.

Hugh has been involved with brass bands for 46 years, and a member of Spennymoor Town Band for 35 years. In that time, he has helped to raise more than £200,000 in funding to help it thrive.

He's described as the "man with the Midas touch" where charity fundraising is concerned, and in January 2015 he was appointed vice president in recognition of his role in keeping the band financially secure for more than 30 years.

For only the fifth time since it was formed in 1850, the band reached the national finals this year and it may never have done so without the funding secured by Hugh.

Despite his role in the band, Hugh isn't one to blow his own trumpet. Hugh, who works for County Durham Public Health Team, said: "People are very kind about my fundraising but to me it's a hobby, it's something I enjoy and there's nothing better than getting a letter where you can feel the staple in the top corner and knowing it's another contribution to a good cause.”

In 2014, he was awarded the Durham County Council chairman’s medal, the highest award possible for a resident of the county.