How HenPower, winner of the TSB Pride of the North East Community Award, has empowered the elderly and brought communities together.

At the age of 87, Owen Turnbull has a schedule that many much younger people would struggle to keep up with. Every morning, the resident of Wood Green sheltered housing in Gateshead, gets up, cleans out the chicken coops, feeds the birds and collects the eggs, before returning to his bungalow to care for his 84-year-old wife, Bell, who has dementia.

Owen is a shining example of someone who has been ‘hen-powered’. The HenPower charity began working with Wood Green in 2012, with the aim of reducing loneliness in older people, giving them extra responsibilities and improving their health and wellbeing. It initially introduced six hens to the community, and now has 41 hens, comprising 17 breeds, one cockerel, and countless fluffy chicks.

“I look after the chickens and my wife,” says Owen, who has been married for 61 years. “I’m a ‘hensioner’, not a pensioner. I don’t know what I’d do if we didn’t have the hens.”

Jos Forester-Melville, Project Manager of HenPower, explains why the organisation helps people like Owen. “It gives him some head space and time away from being a carer,” she says. “He buddies up with his mate Alan in the mornings and they have a bit of a chat about the world, football and politics while they’re working in the chicken coop.”

HenPower, which is part of the Equal Arts organisation, also runs creative programmes such as painting lessons, and gives hensioners the chance to take the birds into schools and care homes. Some of them have even given speeches at international conferences. “We’ve also gone to auctions to bid for certain breeds of chicken,” says Jos. “One of our ladies got so excited that she was bidding against herself.”

The Wood Green residents enjoy mixing with other generations. “When they go into schools it builds a nice bond between older people and children,” she adds.

The chickens have their own personalities, too. “There have been times when one of the residents has had to go off in an ambulance or taxi, and one of the hens has jumped in with them,” says Jos. “We’ve had calls from taxi drivers to say they’ve got an unexpected passenger.”

Why chickens? “They’re really lively, they’re always a distraction, and they’re social creatures. Often in an art session we’ll bring one of the chickens out of the hen pen and put it on a table so that people can look at the feather patterns.”

Douglas Hunter, Co-Director of Equal Arts, adds: “This goes beyond animal therapy. It’s about the relationships between older people and others.”

HenPower began as an experiment in Gateshead and now operates in more than 40 care homes across the country. It has also expanded to Australia, Holland and Taiwan.

Lynne Walker, Sheltered Scheme Officer at Wood Green, has seen the difference it makes. “It was started to bring isolated men out of their bungalows,” she says. “They didn’t seem to integrate in the community as much as women.

“But the hens brought the men out, they were working together and then started coming into the community lounge. It’s given them a new confidence.

“When I think about how much of a difference it’s made, I get quite emotional.” 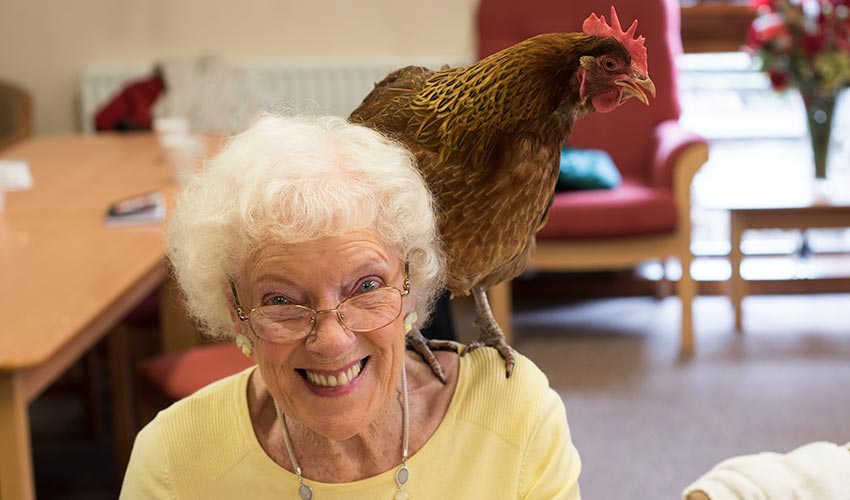