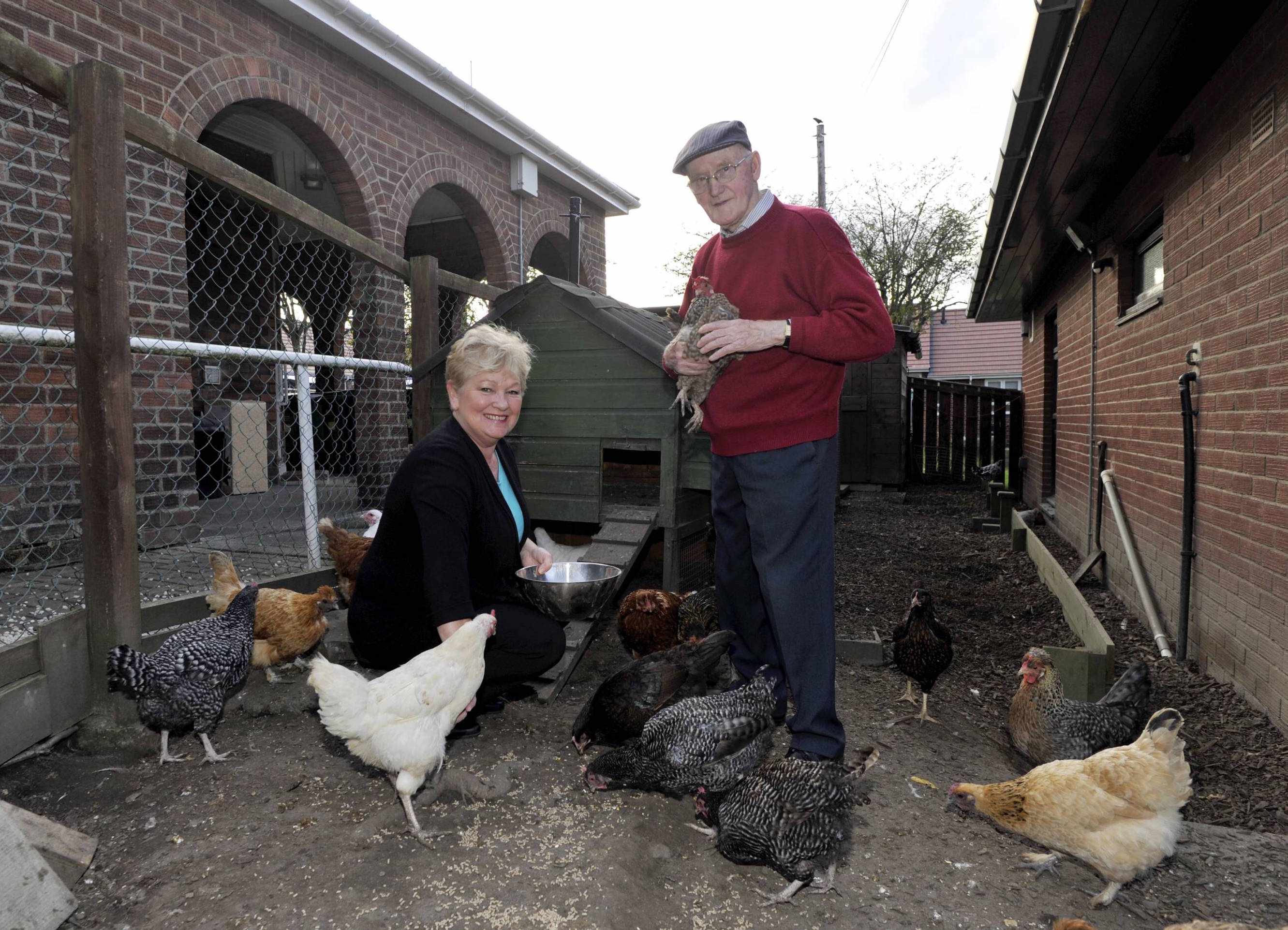 Henpower scheme gives Owen and his friends a new lease of life.

It’s something many of our elderly struggle with everyday - the curse of loneliness.

But one charity has come up with an innovative scheme to tackle isolation, reduce depression and improve people’s wellbeing through the simple pleasure of hen keeping.

The project, called HenPower, was launched by Equal Arts, a charity which provides creative projects for older people. As well as looking after the birds, many of the pensioners go out into the community to share their experiences.

Director Douglas Hunter came up with the idea in 2012 after managers at a dementia care centre in the north east told him about a resident who kept telling staff he missed ‘his girls’. It turned out he was talking about his pet chickens. The following week Douglas brought some hens to the centre, and the rest, as they say is history. Hens are now helping communities up and down the country.

Equal Arts was subsequently given £160,000 from the Big Lottery Fund to test the project in further sites across north-east England. The trial was a phenomenal success and HenPower is now well established and thriving. It went on to win the TSB Community Partner Award at Pride of the North East in 2017.

Owen Turnbull, 88, is just one example of the project’s success.

As ‘Head Hen Keeper’ at his sheltered accommodation, Wood Green, in Gateshead, he gets up at the crack of dawn to clean out the four chicken coops directly outside his bungalow, change the hens’ water and feed them. At the current count there are 27 hens and six chicks.

Owen might later be joined by one of his elderly neighbours to help with sorting eggs in the central common room or tending to the incubator where new chicks are hatching. All the elderly residents muck in – and it’s the chaps who seem to get the most out of it.

Until recently his wife Bell, 86, who has dementia, lived with him too and he was her main carer. But recently she was moved to a care home as her conditioned worsened. It broke his heart, but he is able to seek solace in his hens.

“I know her dementia will get worse,” he explains. “It is hard to explain but I feel guilty. But I have had a good life and it’s not finished yet by a long way thanks to the hens. I like being a ‘hensioner’.”

Overall the scheme has been so successful that the project has been rolled out across the country and is now in 40 care homes. Staff have even reported a reduction in the use of antipsychotic medication where hens are kept.

Lynne Walker, 62, is the Sheltered Scheme Officer at Wood Green. She has been there for 42 years and has never had a day off sick and says having the chickens has changed all their lives. “It’s the best job in the world, she smiles. “It’s not like working, the people here are my family. I don’t even see myself retiring. And we all love the chickens.

“For Owen the hens have been his escape route. When they first arrived Bell was still here and only had mild dementia. But as she got worse and more confused, he found some peace and headspace with his hens. He has been a fabulous carer for Bell but it has been tough for him. The hens have given him joy again.

“It really has brought all the older men out of their bungalows and away from their TVs to socialise rather than staying inside and watching sport. Men aren’t naturally as social as women, and can be quite shy, but they have all been able to bond around the chickens and their care. It really has been fabulous. I had one man who never left his bungalow but now he loves joining in the art classes.”

She added: “When they meet the students they teach them so much than they could learn just from books about the social isolation and dementia issues facing the elderly.

“What elderly gents like Owen do is clearly show the younger generation that they had a life before and a future to come. This is a man who had a life and a career and a marriage. He is still that same man. He is just now better able to express that.”