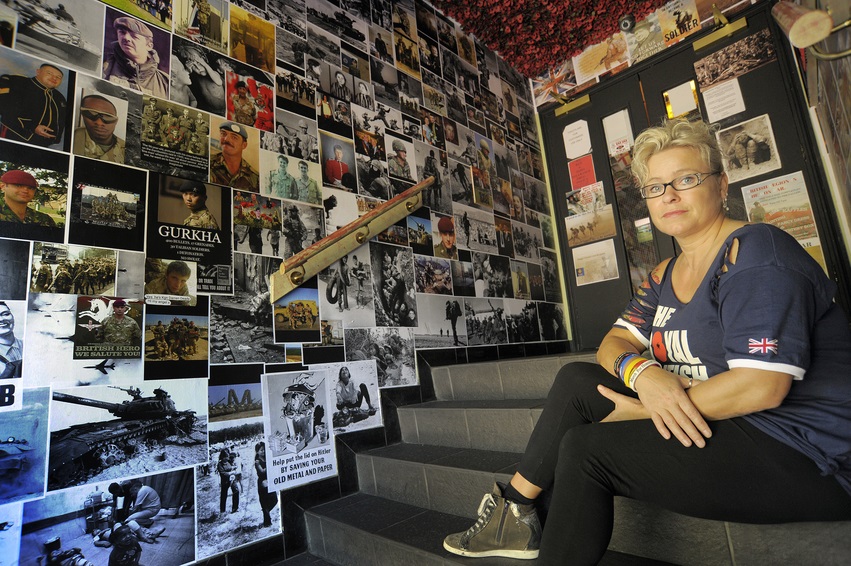 The Don War Memorial Bar in Stockton is a pub like no other. It has been transformed inside to honour the memory of those who have given up their lives while serving in the armed forces - with over 80,000 remembrance poppies glued to the walls and ceilings of the pub in tribute.

Inspirational landlady Julie Cooper is behind the astonishing year-round memorial that has left many veterans who have come to see it in tears of gratitude. There is also a cross for each person who has died in recent operations in Iraq and Afghanistan as well as flags, memorabilia and 5,000 photos of soldiers who have lost their lives in conflict.

Julie has been building the memorial ever since she became landlady five years ago, helped by donations of poppies from her local community and all around the world from grieving loved ones, but it is not just about putting on a display. It is also about bringing the two communities together.

The aim is also to raise awareness of the conditions affecting veterans, those serving and their families such as Post Traumatic Stress Disorder and other psychological conditions.

Julie said: “It’s not just about what you see when you step inside the pub. It’s what goes on behind the scenes as well. We try to give the veterans, some of whom have no family, advice and support or simply just be there for them with a cuppa and a smile. It’s the very least we can do.”

Locals at the pub continue to show their dedication to the Armed Forces with regular fundraising events which have raised thousands of pounds for veterans’ charities.

Every Sunday the pub provides a Sunday dinner for veterans at no charge, and a special Christmas Day dinner for former servicemen who don't have family to spend the day with. And recently Julie involved regulars and local residents to take part in the 100 Shoe Box Challenge, urging people to fill a shoe box with goodies and toiletries to send to personnel deployed overseas.

By November 1, Julie plans for more than 100,000 poppies to line the walls in time for the centenary of the end of the Great War.

The poppies are sent to her from army families and come in from all over the world. "I am so passionate about it,” Julie said. “This pub has got a massive following, not just in the area, or the UK but over the world. I have people coming in here from America who have heard about it. It is an honour for me to be able to provide that for them, and be humbled by them and what they have done, who they are.”

She added: “When a veteran who has not been in before walks in, they are often moved to tears by what they are seeing. Even the hardest of men I’ve seen break down. But they leave feeling very positive.”

One veteran loves the tribute so much he comes every day to take it all in. Former fusilier Tommy Trotter, 97, was at the D-Day landings in 1944 but now has dementia. “But he still knows how to get to us,” said Julie. “He comes by bus around 2pm and stays until 6pm. He gets a free toastie or pie from us and pints bought for him. Then we send him home in a taxi.”