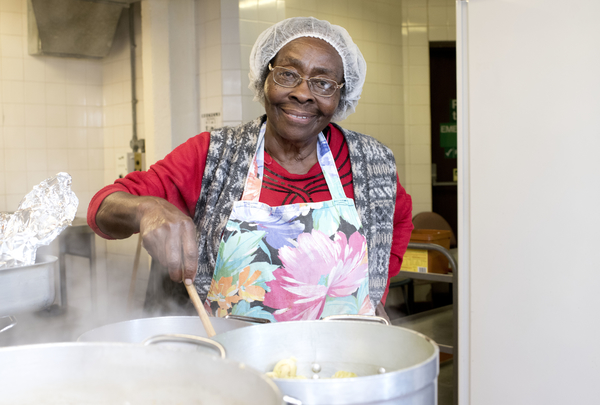 One year on, iconic Icolyn is still feeding nourishing meals to hundreds of homeless

It has been a full year since pensioner Icolyn Smith was honoured with the TSB Community Partner Award at the prestigious Pride of Britain.

At the age of 87 it could have been the crowning point of her life, and the perfect excuse to put her feet up after a remarkable 30 year mission to serve up nourishing meals to homeless people in Oxford.“Our motto is to always look forwards, and never look backwards,” says Mel. “Society is about conforming, but that is stifling. We believe being creative is important for recovery. When people come out of addiction, we want to open up that tap and offer a bridge for them to express themselves. We want them to feel good about themselves again.”

But a year later, Icolyn is busier than ever, finding new ways to help those in need.
Her son Gary, who is also a volunteer at Icolyn's Oxford Soup Kitchen, says: “Mum might be nearly 90, but she is always busy, the last thing she feels like doing is sitting down. She has an inner strength which means she just keeps going.”

Since Icolyn won the award, TSB has supported the charity with branded gazebos and uniforms as well as kitchen equipment including a fridge and a freezer.

Gary says: “The support from TSB has been amazing. We managed to buy lots of new equipment. But the award also meant we have have been inundated with donations from the public - everything from money, shoes, clothes and sleeping bags. It’s all been a massive help.

“Mum has also been giving talks in local primary schools, which as a result they have raised money for us. And some older pupils have come to help out in the kitchen by volunteering. The whole community is much more involved.”

Icolyn's incredible contribution was sparked by an incident 30 years ago, when she saw a homeless man rummaging through a bin for food.

She resolved there and then to do everything in her power to help. Shortly afterwards she set up the Oxford Community Soup Kitchen at the Asian Culture Centre. “The first week a few people came in, the week after it was 60 and the week after it was 100 – and it just increased,” says Gary, 52.

Today, Icolyn and her team offer a three-course meal to around 50 people twice a week, on a Wednesday and on a Saturday. To date, the Oxford Soup Kitchen has provided more than 45,000 meals over the past three decades.

Gary says that Icolyn has always helped people. “We’ve grown up always having to share our mum. People who use the kitchen call her Ma and are very protective of her,” he says. “She’s never home,” he smiles. “She’s either at the kitchen or helping another elderly neighbour. She always used to say to us, “if you can’t help anybody in life, then what is life about?”