Graffiti Kings: the artists who are bringing beauty to our streets

In 1989, Darren Cullen from Croydon, south London, was expelled from school. He’d been a bad student, spending most of his lessons doodling on his textbooks. Darren was just 15. His future looked unpromising.

It was around this time that Darren saw graffiti for the first time, in a photograph a friend had taken in the New York subway. “We’d never seen anything like it before,” he remembers. “It was something I immediately related to.”

Fast-forward 28 years, and Darren is surfing a creative wave he helped to create from nothing. Graffiti used to be a byword for trespass, truancy and vandalism. Now it is called ‘street art’. And good street art, as Darren knows, is in high demand, boosted by the popularity of street artists such as Banksy. Graffiti Kings, the collective that Darren founded in 1999, is helping to change the way graffiti is perceived – from an illicit underground activity to a legitimate cutting-edge art form that is increasingly having a positive impact on local communities.

But there was nothing about scrawling with marker pens on derelict buildings in the middle of the night that indicated to Darren the beginnings of a brilliant career. In the mid-1990s he was working in a badly paid job as a labourer, and his graffiti was a secret hobby. Darren, whose tag is SER, spent time developing a more refined style, based on graphic realism, and soon became something of a folk hero to younger boys. Then one day, the project manager of a local youth club in Mitcham, south-west London, asked him to hold a graffiti workshop for disadvantaged teens. The place was packed out.

“I think graffiti naturally appeals to rebellious teens,” he says. “But once you teach them that it is a real skill, that they have to work hard at to master, then you get their focus – there is a big difference between random destructive vandalism and making something that has meaning and beauty to it.

“It was a boost for me, too, to see that I could give something positive to kids who were in the same situation I’d been in at their age. There are a lot of young people out there who’ve given up on learning anything because they’ve had a bad start at school.”

Darren’s workshop was so popular, he was asked to do more. He ended up working five days a week to keep up with demand, and council youth services from other London boroughs were soon asking Darren to hold workshops. But as all his time was taken up in Mitcham, Darren asked his graffiti-artist friends to teach instead. And so the Graffiti Kings movement was born.

It was no fluke that street artists were being taken seriously. They had become successful designing nightclub walls and setting up pirate radio stations in the 1990s, and were rethinking their lives. They wanted to pursue their art legally. Graffiti Kings was the first professional graffiti and street art company to be set up in the UK. Its members knew that they had to shake off graffiti’s shoddy image. Two decades later and they are making works for film premieres, designing tattoos, making wall art for offices and even running corporate workshops, with business people pulling on hoodies to spray-paint underpasses.

But the roots of its craft are still very relevant to what the collective does. A large proportion of its work is making pieces to enhance local communities. For example, Graffiti Kings is now creating a huge wall portrait of local hero Randhir Singh Heer at Birmingham New Street Station. Randhir set up the Midland Langar Seva Society (MLSS), where more than 200 volunteers across the UK now serve around 5,000 meals a week to people in need in 17 towns and cities. The charity’s amazing work was rewarded this year when Randhir received the Pride of Birmingham TSB Community Partner Award.

Darren’s involvement in community projects goes back to his early days as a workshop teacher. The Manager of West Croydon Station approached Darren one day to see if he could help him prevent his station being vandalised by local kids. The Station Manager had got to know the children, and wanted to help them, but Darren’s classes were full. Instead, with Darren’s help, the kids were allowed to paint the outside of nearby Wallington station. A few months later, the Station Manager told Darren that the public loved the mural they had created and that the artwork had remained untouched. “Then my phone just went berserk,” says Darren. Other councils hired him and he made artworks at stations and underpasses all over south London: Morden South, Tooting, Vauxhall, Eden Park, Peckham. Railtrack and Thameslink contacted him. In adulthood, his teenage vice had become a virtue.

Other councils and organisations also began to see how street art had the potential to promote positive change. In 2004, Winchester City Council, together with the police, youth centres and the probation service, set up an initiative to tackle city centre graffiti and commissioned its first piece of graffiti art. Local artists and young people came together to paint murals on the formerly glum Cross Keys Passage. Graham Love, of Winchester City Centre Partnership says he thinks the artwork looks great. “I have noticed people of all ages, from senior citizens to young children, taking time to admire the creative talent of the artists’ work. Community art is a colourful alternative to walls daubed with unsightly graffiti and helps to lift the presentation of otherwise disused areas.” In 2010, the University of Bradford unveiled a 950sqm spray-painted mural on the hoardings of one of their housing projects. Created by the British graffiti artist, Mohammed Ali, its theme was education. In February this year, a community-led initiative, Art for Estates, completed its pilot graffiti art project at the Ferdinand Estate in north London. The estate’s peeling walls and garage doors have been transformed beyond recognition by striking street art murals. Councillor Pat Callaghan, Cabinet Member for Housing at Camden Council, told the Evening Standard: “We’re always happy to see these sorts of ideas come to fruition as they help create clean, safe and pleasant environments on our estates.” By 2011, Croydon Council reported that levels of problem graffiti had dropped because young people no longer considered it “cool”. Becoming a graffiti artist, however – there was nothing cooler. 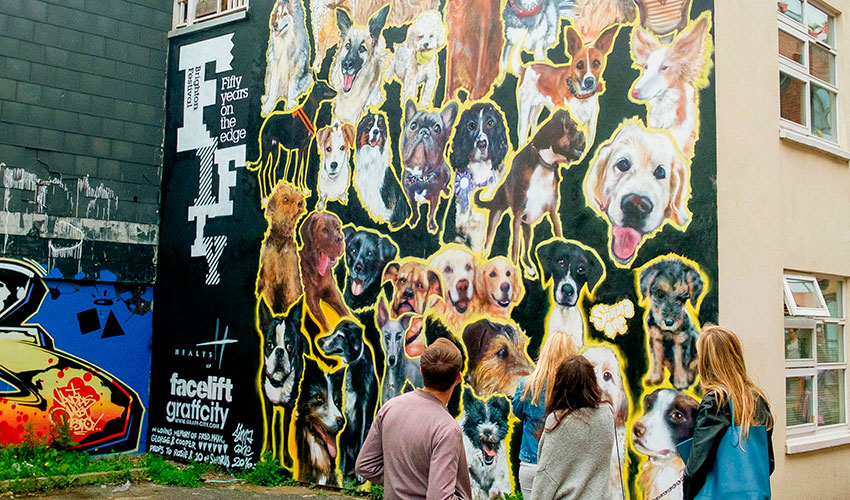 The regenerative power of street art is starting to be recognised outside city centres. In Brighton, the artist Sinna One has made a towering and beautiful memorial mural dedicated to the dogs killed in the First World War. In 2012, Darren painted a stylised portrait of the Duchess of Cambridge and baby Prince George in Kent, where he now lives. “The birth of the nation’s future monarch has been immortalised on a Snodland wall by an internationally renowned graffiti artist,” reported the local paper, proudly. Locals in the Midlands town of Tamworth were excited to host an exhibition of art featuring the 3D work of Graffiti Kings collaborator, Andrew ‘Title’ Mills.

Street art’s newfound legitimacy has not diminished its appeal for young people. It still has an edge. And projects require great skill – making it a pleasing challenge: “We’re working with glass-etching techniques,” says Agha. “And on a clean graffiti project on a busy street where we’re cleaning away the dirt from the pavement leaving an image from the contrast between clean and dirty.” It’s demanding work. Hard-to-reach areas have special prestige: “Artists recently worked on a mural on the wall of a 12-storey building in Spain. They had to abseil down on it whilst painting – so not for the faint-hearted.” Speed is of the essence – murals appear overnight.

If you work hard, you can now choose to make graffiti your profession, which was certainly not the case when Graffiti Kings started. “You couldn’t make any money with graffiti,” says Agha. Now, the new generation of teenage Darrens have a choice: make their mark with ugly vandalism or work towards creating lastingly beautiful, but still provocative, pieces of art that will inspire others in their communities to do great things.

Discover how the Graffiti Kings and TSB surprised a Pride of Birmingham TSB Community Partner Award winner with a unique piece of street art here.