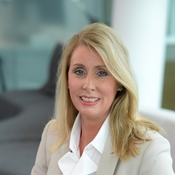 Debbie became TSB’s Chief Executive Officer in May 2019 and has over 25 years of experience in financial service leadership.

Debbie has extensive experience of leading turnaround strategies and, while Acting CEO of Clydesdale Bank, led preparations for its successful demerger and subsequent IPO. Debbie has overseen the execution of a number of far-reaching transformation projects.

Debbie sits on the CBI President’s Committee and is a member of the Glasgow Economic Leadership Board and the Strathclyde University Business School Advisory Board. Debbie was Vice Chair of the Confederation of British Industry (CBI) Scotland Council for two years until 2019 and was a Non-Executive Director of the Scottish Court Service for over three years. In 2015 Debbie became the first female executive to sign Scottish banknotes and in 2016 she was the University of Strathclyde’s Alumna of the Year.

Debbie holds an honours degree in Industrial Relations from the University of Strathclyde and is a fellow of the Chartered Institute of Bankers.