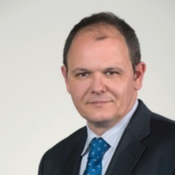 David was appointed to the Board on 22 January 2020. He is Banco Sabadell's Chief Risk Officer (CRO) and an Executive Board Member, with responsibilities over risk control, compliance, research and supervisory and regulatory relations. He is also a member of the Supervisory Board at the Hellenic Corporation of Assets & Participations S.A. (HCAP).

Previously, David was an Associate Professor (Lecturer) at ESADE Business School (banking, finance, macroeconomics, 2015-2018), Deputy Managing Director-Banking at the European Stability Mechanism (2012-2015) and Deputy Director of the Western Hemisphere Department at the International Monetary Fund (2010-2012). Prior to joining the IMF, David served as State Secretary for Economic Affairs at the Spanish Ministry of Economy and Finance from 2004 to 2009 and was also Chairman of the European Union's Financial Services Committee (2005- 2009).

David holds a MSc. in Economics from the London School of Economics and an Economics degree from the Universitat Autònoma de Barcelona.