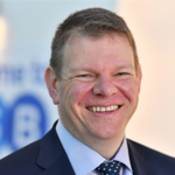 Iain was appointed as Chief Risk Officer (CRO) at TSB in January 2017.  He joined the bank from Nationwide Building Society where he was their CRO and a member of their Executive Committee.

Iain was Nationwide’s first CRO when he joined them in 2011. He built their Risk team and established their Enterprise Risk Management Framework, and he has directed their credit strategy for the last five years.

Before that Iain was Chief Credit Officer for Santander UK retail through the financial crisis. Having joined Santander seven months after they acquired Abbey, Iain played an important role in bringing credit losses under control and making Abbey/Santander an effective competitor in the mortgage market.

Earlier roles at Capital One and HBOS Credit Cards, and an early career as a manufacturing engineer and strategic consultant have given Iain a breadth of experience that is unusual for a risk officer.